A watch dedicated to M. R. Štefánik and his fans

The life journey of Milan Rastislav Štefánik (1880 - 1919) is truly exceptional. After studying astronomy in Prague, he decided to go to Paris in order to establish himself in the scientific environment. Before long, one scientific mission followed another. During his travels around the world, he mainly observed solar eclipses, but his interest was wider. He photographed people and beautiful natural scenery, collected rare artifacts, or was interested in the customs of the natives. Before the war, he traveled to countries such as Russia, today's Algeria and Tunisia, Tahiti, Brazil, Ecuador, or Morocco, and his activities gradually began to lose their purely scientific character in favor of diplomacy. After the outbreak of war in 1914, he fought on the Western and Serbian fronts as an aviator, but from the end of 1915 he devoted himself exclusively to political activities in an effort to break Austria-Hungary and build a new Czechoslovakia on its ruins. In addition to deliberate propaganda and important geopolitical arguments, Štefánik threw himself into building Czechoslovak legions, an army that fought in the First World War on the side of the Treaty (France, Russia, Great Britain, later also Italy, USA and others) against central powers (especially Germany and Austria-Hungary). As a result, he visited other countries (Russia, Romania, the United States, or Italy), proving to be a first-class negotiator and diplomat attacking both the morals, logic, or feelings of his listeners. In particular, the gentle generation could not resist this excellent and charming narrator, which he was aware of and used extensively. Štefánik began his staggering military career in 1915 as a soldier and in 3.5 years he ended up as a general and war minister in the newly formed Czechoslovakia, which still arouses admiration. However, he owes this rocket rise to his diplomatic activities rather than military, when he was able to skillfully combine French and Czechoslovak interests. His short but even more remarkable life ended prematurely in a plane crash near Bratislava, when he died at the age of 38. 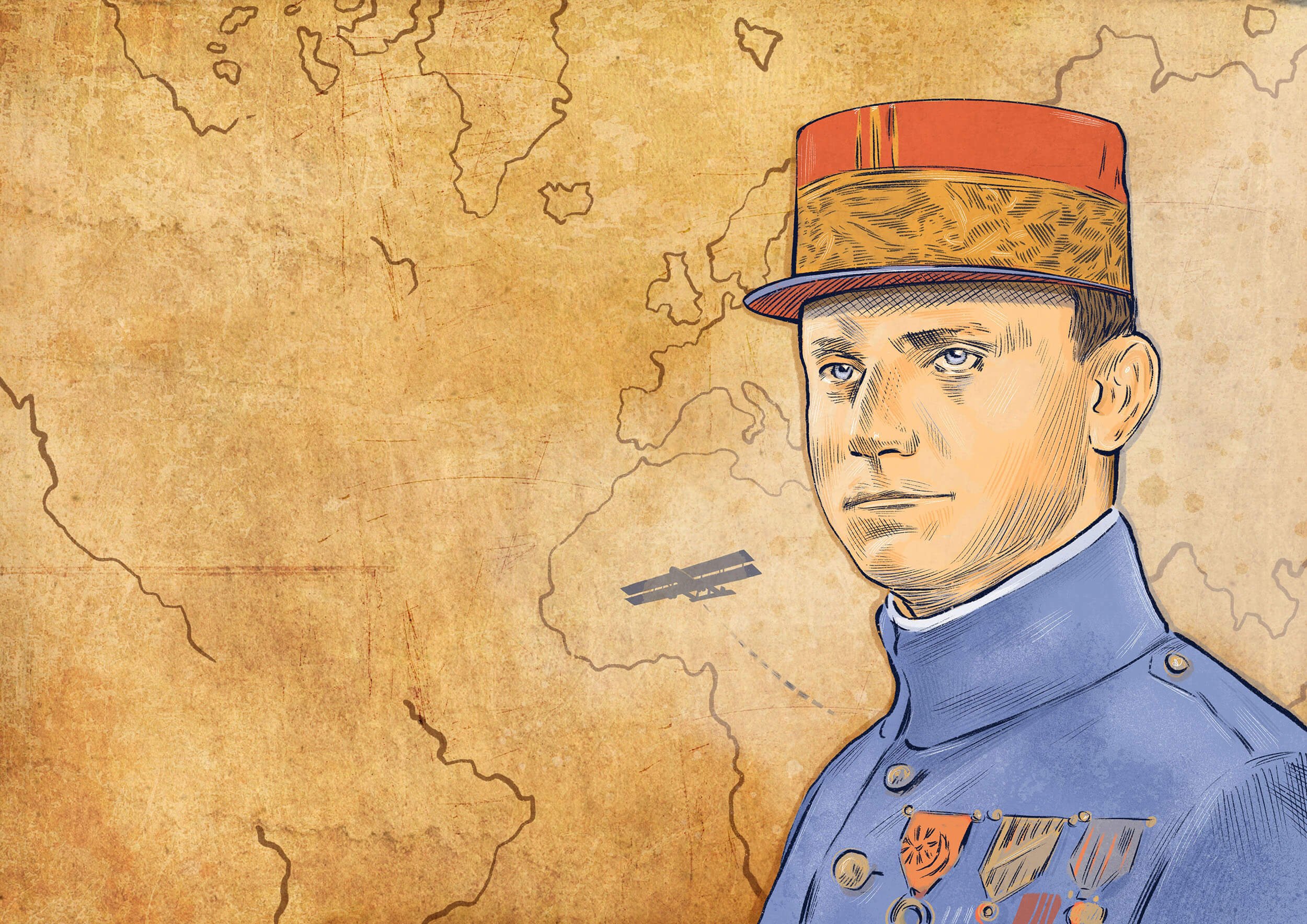 Štefánik was a modern man who was enchanted by progress and new inventions. Since the first attempts of the Wright brothers, the Air Force has made relatively great progress, and Stefanik became interested in this technical innovation shortly after his arrival in Paris in 1904. The Air Force provided him with exactly what he wanted. Something new, dangerous and, last but not least, could have given him some fame, as the pilots enjoyed great social prestige. Štefánik flew for the first time in 1911, but according to some indications it was possible two years earlier. As a French citizen, he had to enlist in the infantry in 1914, but thanks to his contacts, he joined the Air Force. After a few months of flying, he was transferred to the western front to the town of Arras. On a Maurice Farman, he performed 38 reconnaissance or fighter flights with a total length of approximately 80 hours. For his work as a military pilot, he earned praise in an army order on July 14, 1915 for the anniversary of the conquest of the Bastille - a French national holiday - and later the War Cross on August 16 of the same year. He was transferred from the Western Front to the Serbian one, from where he had to be evacuated due to his extremely poor health. With the exception of a few observation and propaganda flights on the Italian front in 1916, his aviation career ended in 1915. Naturally, his ingenious and restless spirit could not be satisfied with the condition of that time aircrafts, which had many technical shortcomings, and thus offered several improvements. In addition, he rightly considers himself one of the pioneers of military meteorology, when he organized a meteorological service in General Foch's army. Štefánik also had the main credit for the introduction of weather forecasts in the Romanian army. He also planned to set up an allied meteorological military service to serve the treaty armies, but due to extreme occupancy during the First World War, he no longer devoted himself to it. Štefánik's death still evokes great passions and debates. For his return to his newly established homeland on May 4, 1919, he decided, for the time still unusual but even more romantic means of transport, the plane. As it was a relatively long flight, he moved the launch from San Pelagio Airport near Padua further north to Campoformido, near Udine, in order to shorten the journey. The choice fell on a Caproni Ca.3 aircraft with an output of 450 kW, which flew the route Udine, Klagenfurt, the valley of the river Mur, Bruck am der Mur, the valley of the river Mürz, Wiener Neustadt and Bratislava. His last flight became as fatal to him as the entire crew of two pilots and one mechanic. Despite many rumors and conspiracy theories surrounding Štefánik's death, it was most likely just an ordinary plane crash. Štefánik relatively quickly became a national hero, whom Slovaks liked together. Despite almost four decades of communist confession, with the exception of political emancipation around 1968, after a change in the political situation in 1989, he quickly returned to the forefront of the "Slovak pantheon" in addition to the halo of a figure recognized by the unpopular regime. We commemorate the year 2019 as the 100th anniversary of his death and for that reason we bring you one hundred-edition limited edition model of this beautiful and unique pilot watch: 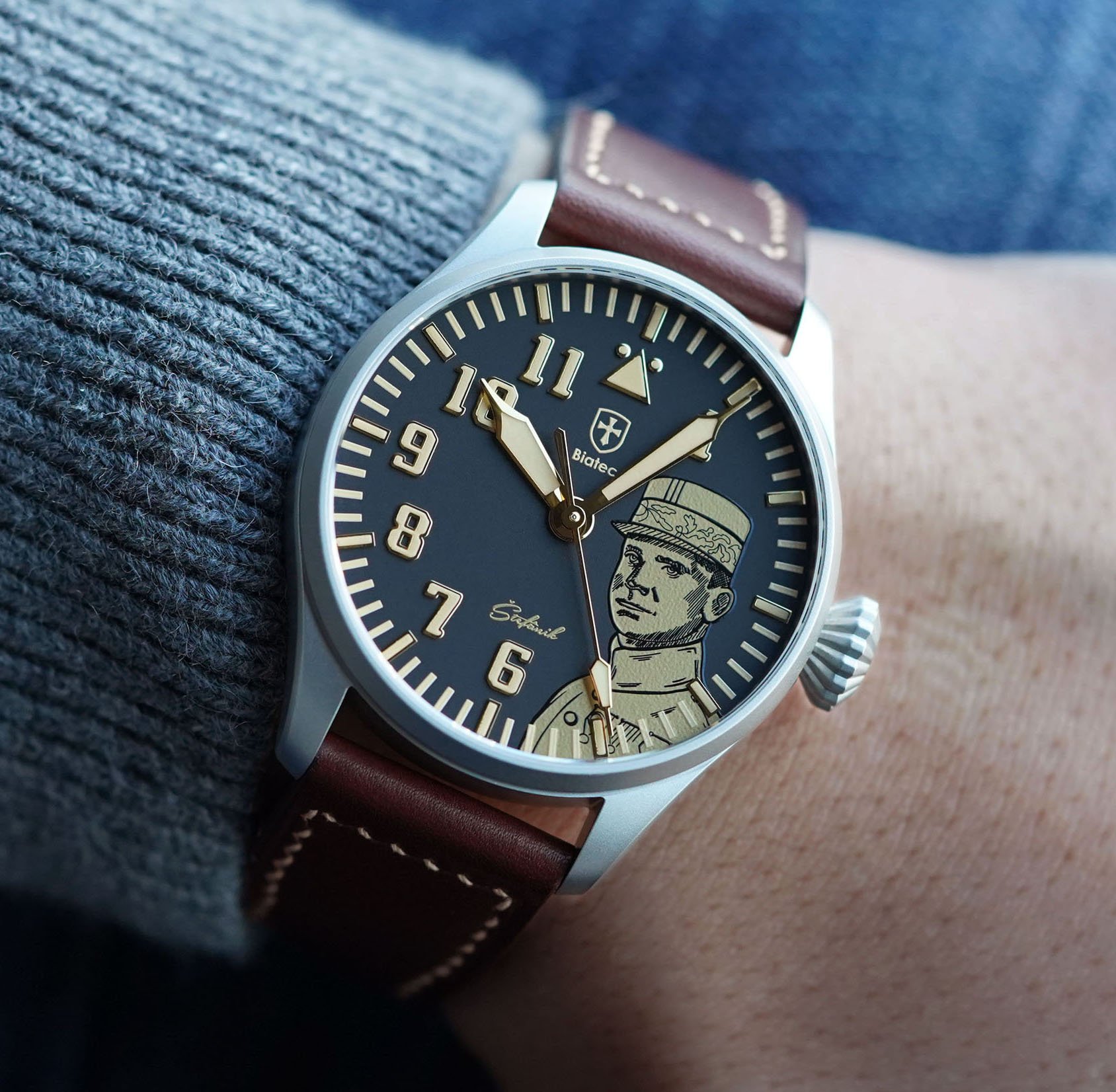